Published: Monster of the Week mysteries

My brother wrote a super awesome game called Monster of the Week. It’s an episodic game based on TV shows like Supernatural, X-Files or Buffy the Vampire Slayer. It’s one of my favourite tabletop games of all time and it would be even if my brother hadn’t written it.

I’ve been running a regular game of this for months, more recently with shared narration. I’ve put together notes from a couple of sessions for other people to run. Please feel free to use these in your own sessions.

The Shadow Man – This is a Slenderman inspired mystery where the hunters find out a number of children have gone missing.

Music Festival – This mystery is set at a music festival, that is still running despite a number of people dying during performances.

I’m releasing both of these under a creative commons licence, meaning I’m fine for people to use and remix the content as long as I’m credited as the writer and creator and you don’t use them/repost/publish to make money.

I’ll try and get a couple more written up soon…

At the start of 2014 I joined a new squad at work, we’d never any of us worked together before so we had a day out of the office doing exercises to get to know each other and focus on our upcoming projects.

One of the exercises we did was a game where we split into two groups and each person wrote down four facts about themselves on post it notes. The facts were then shuffled up together with everyone else’s and each group took a turn reading facts out to the other group. The other group had to guess who had written the fact, who it was true about. You scored a point if you got it right.

Aside from being an excellent test of my poker face, it was fascinating to me. Because we knew these facts would be read aloud you chose quite carefully what to write. You had to think ‘what do I want these people to know about me?’

I chose a deeply personal one ‘once went to Idaho to meet a girl’, knowing that the other group would almost certainly assign that fact to one of the men in my group. So in game terms it was a clever move, but it also revealed something pretty pertinent to me: it was a quick and easy way to come out to the whole group, to get that out of the way.

Other people chose various things of varied importance, like ‘favourite colour is green’ or ‘cried in the movie Up’ which revealed or didn’t reveal different parts of their personality.

How do you decide which random facts about you are the most important?

Which form a large part of who you are and how you act?

Which inform how you interact with other people?

It was these questions that spurred me to create the game Four Things. In this game people select two from a list of established facts, add one true thing from their own lives, and create their character based on those things. Then you spend a few rounds of the game exploring the characters, their interactions with each other and what the facts mean in the grander scheme of things.

It’s a deep character game – one designed to make people think and ultimately, to increase empathy between the players. I have had a lot of fun with this game, I playtested it at a convention where some people chose to share deeply personal things and we had a really supportive debrief afterwards.  It made me better friends with those people, and I hope it will do the same for anyone who plays it.

It’s somewhat informed by the minimal rules/deep character game play of Grace, (link to game in the comments), which is one of my all time favourite games. Four Things is GM/Facilitator less, letting everyone play and create the story equally.

I recently got to play the game Deadbolt by Elizabeth Shoemaker Sampat. It felt like what this game would be on steroids, or possibly, Four Things is Deadbolt Lite

I really like games that deepen our understanding of ourselves and how we interact with other people. Games are great for escapism too though, and that’s why I also wrote a horror movie version of  this game, but more on that in a later post.

Four Things is best played with people you know, make sure you agree on a tone and where the line that shouldn’t be crossed is, and then go for it. It can be about an hour long, or play longer scenes to draw it to two and a half or so hours.

Some time last year I was driving home with my flatmate and we were talking about the possibilities that horror movies can create for roleplaying – for deep character stuff.

I mentioned the Purge movies, which I had read about but not seen. He wasn’t familiar with them so we talked about the premise and started riffing on ideas for characters and set up.

He wrote a ton of notes based on that conversation and I finally got around to typing them up and making them more game shaped a couple of months back. It’s been through a few drafts now and I think I’m nearly ready to playtest. Here’s a sneak peek:

You had a plan, you were going to be safe and sound for the Purification… but there’s a spanner in the works, your plans didn’t work out, and now you’re stuck in this place with people you don’t know and cannot trust. Can you survive the night?

In this game your characters are in a safe space during the annual purification. Some of you have hidden agendas, some of you want to protect someone and some of you just want to survive.

In terms of character creation I’ve gone super simple – using archetype cards. Inspired partly by the incredible Until We Sink by Magnus Jakobsson

Players pick a type of character such as Opportunist, Hunter, Thrillseeker, Parent or Teenager, answer a couple of questions and then game play can start. If that character dies, you can just pick another character card and join back in.

As I said this game hasn’t yet been playtested, so although I’m feeling pretty good about how the latest draft is looking I’m not too sure how it will work in practise. Watch this space, I’ll be aiming at playtesting it sometime soon!

Published: The Silver Kiss of the Magical Twilight of the Full Moon 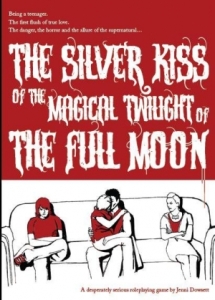 A long time ago now, there was a book called Twilight and it was sort of controversial and people were talking about how much they either loved or hated it. As a long term fan of  Young Adult supernatural romance  I enjoyed the resurgence of interest in the whole genre.

So…I wrote a game (I wrote a novel too but that’s a different project altogether), and it was the first game that I ever published. I have print copies in my house even!

My game is fondly named after several different young adult supernatural romances and is designed to be a parody. The set up is more of a convention game or one off than a campaign, (Monsterhearts is better for a campaign).

It rocks at conventions, me and my best friend Sophie sometimes run this game as a double feature with two groups in the same room playing interconnected games which is a really fun and raucous way to play.

The Silver Kiss game is designed for four players and one facilitator. Two players play a pair of supernatural best friends and the other two play ordinary humans. Roles are set, so one of the supernaturals and one of the humans falls in love as soon as they see each other and then the game plays out with everyone dealing with the romance and their own secret agendas.

The Silver Kiss of the Magical Twilight of the Full Moon

I wanted to encourage silliness and fun so I added in an instant XP system, where if a player uses one of a pre-printed emo quotes in the game then they get a piece of candy. It works pretty well to get the players invested and energised.

Keen on giving it a go but not super familiar with the genre? Here’s some recommended reading:

The Silver Kiss by Annette Curtis Klause which is a great book and in my opinion better than Twilight, she wrote a fantastic one about a girl werewolf, boy human relationship called Blood and Chocolate as well.

Wicked Lovely by Melinda Marr is a great romance about how absolutely awful faeries can be, and how intoxicating.

Generation Dead by Daniel Waters if you have trouble imagining zombies in love.

Beautiful Creatures is an underrated piece of awesome about a witch girl and a human boy. Very Southern Gothic and pretty.

Got any extremely Silver Kiss reading or Watching suggestions to make? Please comment, we can make a master list…